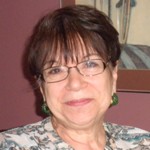 And there in the corner of her vision, she sees a snake crawling lazily through the grass. As quietly as she can, she picks up a rock within her reach. Then, with a giant step, she stands beside the snake. She brings the rock down upon its head. She strikes it again and again and again.

Copyright © April Laufer 2014
April Laufer is a freelance writer. She attended the University of Toronto and Hebrew University and completed a Masters Degree from the Jewish Theological Seminary in New York.  She has published in a number of journals and has been Contributing Editor for the Jewish Review. April’s short stories have been published in Canadian Woman Studies, Facts and Arguments page of the Globe and Mail and the Literary Section of the Canadian Jewish News.