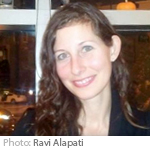 Olga Klinger was born in St. Petersburg, Russia and grew up in the Bay Area. She holds a B.A. in English and French from Pomona College and is currently on break from an M.A. in International Relations and Economics at Johns Hopkins University. Her work has appeared or is forthcoming in 34th Parallel Magazine and Straylight Literary Arts Magazine. Olga is currently working as an editor, and has also started her first novel. She lives and writes in San Francisco.