A Brief History of A Long War 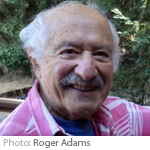 A Brief History of A Long War

Chester Aaron was born in a coal mine village in western Pennsylvania in 1923, during the Depression. His was the only Jewish family. A soldier in WW II, he participated in the liberation of Dachau. He became a Professor of Literature and a farmer in California. The author of 26 books (fiction, non-fiction; adult, young-adult), he has received various honors, including a grant from the National Endowment for the Arts. His work has been translated into German, French, Dutch, and Chinese. For more information, visit his website at http://www.chesteraaron.com.