Dream About the Vanished Jerusalem 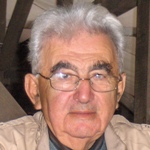 Dream About the Vanished Jerusalem

For those who have lost what they loved, they are the only sun.

Copyright © Grigory Kanovich 2015. Translation copyright © Yisrael Elliot Cohen 2015.
Grigory Kanovich was born in Kaunas (Kovno) Lithuania in 1929. He grew up with a command of Yiddish and a deep familiarity with traditional Jewish culture in Eastern Europe. In the postwar period he wrote mainly in Lithuanian and Russian, often dramatizing the Lithuanian Jewish experience in the 19th and 20th centuries. He was a leading Jewish activist in Lithuania. He made aliya in 1993 and has continued his creative career in Israel. Kanovich has written in a number of genres, achieving international fame, marked popularly by huge print runs of up to one million copies, and critically by scholarly recognition of his impressive talent.
Mr. Kanovich has won numerous awards. He was shortlisted three times for the Russian Booker Prize, including for his Holocaust novel, Charmed by the Devil, and has received prestigious prizes in Russia, Lithuania, and Israel: National Prize of Literature of Lithuania (1989) for his trilogy,Candles in the Wind, Prize of the Lithuanian Government for Literary and Cultural Achievements (2010), and the Israeli prize in the name of Yuri Shtern for a lifetime of literary achievement. Kanovich's The Park of the Jews was voted best Russian-language Israeli novel in 2007. His works combine the ethnic with the ethical. More information about the author at: www.gkanovich.com.
Yisrael Elliot Cohen (the translator) was born in Boston. He received as B.A. from Harvard and a Ph.D. from Yale, both in Slavic Languages and Literatures. In the USA and Canada he taught humanities courses, including on Russian literature. He made aliya in 1979. In Israel he has worked as a translator from Russian into English, specializing in topics relating to Soviet Jewry, and as an editor. For 18 years he was co-editor of "Jews in Russia and Eastern Europe." At present he edits Yad Vashem's online site, "The Untold Stories," about Nazi killing sites of Jews in the Soviet Union. Dr. Cohen can be contacted at evcohen@mail.huji.ac.il.