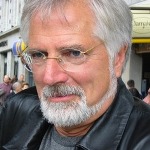 H. William Taeusch grew up in Wooster, Ohio. He received a with a BA in English from Harvard, an MD from Case Western Reserve, and an MA from the Shaindy Rudoff Creative Writing Program at Bar Ilan University in Israel. He has worked as a neonatologist and lung researcher for over thirty years. His stories have appeared in numerous journals and in the anthology, Israel Short Stories. Taeusch lives in Oakland California, and Jerusalem where he is working on his first novel.