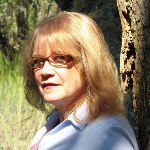 Mary Glickman was born on the South Shore of Boston, Massachusetts, and studied at the Université de Lyon and Boston University. While she was raised in a strict Irish-Polish Catholic family, from an early age Glickman felt an affinity toward Judaism and converted to the faith in her late twenties. She now lives in Seabrook Island, South Carolina, with her husband, Stephen. Glickman is the author of Home in the Morning; One more River, a National Jewish Book Award finalist in Fiction, and Marching to Zion. An Undisturbed Peace is her fourth novel.