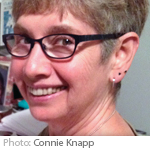 Leah threw open the taxi door and leaped out. Jacob clung to his mother. Anyuta searched through her purse for the money to pay the driver as he lifted her possessions from the trunk. Then she took her son's hand in hers, rubbed it gently, and began lugging the bags and boxes and suitcases back upstairs.

Anne Corey is a writer, artist, poet and teacher, with a Ph.D in Educational Theatre from New York University. Her stories, poems and critical writing have been published in Poetica Magazine: Contemporary Jewish Writing, Bubbe Meisehs by Shayneh Maidelehs, Sinister Wisdom, reviewingtheevidence.com, and other online and print venues.  “Leaving Home” is part of Corey’s novel in progress, Anyuta’s Journeys, a series of interrelated stories based on the experiences of her maternal grandmother, a Russian-Jewish immigrant living in Coney Island in the first decades of the twentieth century.