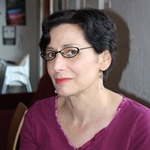 Parents couldn’t protect you from the world because they were a part of it themselves. It had marked them indelibly before you ever arrived. By the time you reached the theater, the second act was underway, and the best you could do was try to surmise what had already happened..

Robin Vigfusson is a wife and mother who lives in New Jersey. She earned an M.A. in Political Science from NYU, but her real love is fiction, especially short stories. Her work has appeared in The Blue Hour, Referential Magazine, and and podcast on No Extra Words. Her stories will also be featured in Caravel Literary Journal and Bookends Review.