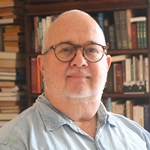 Marc returned to the house and noticed the light on in the basement, but when he went down Jack was no longer there.

Daniel Bissonnet's early photography has been published in the New York Times, Texas Monthly, and elsewhere. When supporting a family as an IT Management Consultant for IBM he turned his writing skills to adult training and development articles in professional journals. Having recently left HP, he is returning to the creative passions of his youth. Today he delivers d'vars (sermons) at the Museum Minyan, a lay led equalitarian minyan at Congregation Beth Yeshurun in Houston Texas. "Visiting Jack" is his first published short story. The character Jack is central to his in-progress novel with the working title Memory Care Unit.