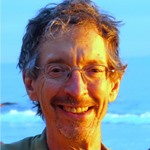 Sam Osherson is a psychologist in private practice in Cambridge, MA, and the author of a number of books, including The Stethoscope Cure, a novel about psychotherapy and the Vietnam War.