Curly Hamson and the Jewish Money 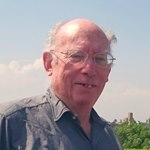 Curly Hamson and the Jewish Money

Carl Schiffman is a native New Yorker and a graduate of the MFA program at Yale Drama School, where he was an Arts of the Theater Fellow. Five of his short plays were produced off-Broadway in the 70s, but no professional career resulted. He began publishing short stories in 1972. He is 82 and has been retired for many years. He made his living as a state and federal civil rights investigator, then as a writer for non-profit organizations and fund raising consulting firms, which experience prompted the Curly Hamson series. His mother's father was president of an ultra-Orthodox synagogue in Freehold, NJ;  his parents were non-observant Jews with a strongly leftward political tilt. Before Yale, Schiffman was circulation manager and occasional music and movie reviewer for The Jewish Examiner, a Brooklyn weekly, and also worked in the classic Jewish Catskills as a busboy.