One Woman, One Time 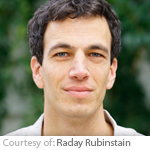 One Woman, One Time

Translated from Hebrew by Dalya Bilu and Ksenia Tserkovskaya

Yoav Shutan-Goshen was born in Israel in 1980. He received a BA in law and humanities from Tel Aviv University and completed a screenwriters program at the Sam Spiegel Film and Television School. Shutan-Goshen has worked as a journalist for Yedioth Ahronoth, as well as writing a comic column for The Marker. He is now a playwright for the Gesher, Beit Lessin and Beersheba Theaters, and also wrote a drama series for Channel 2 TV. His feature film will be released in 2017. Shutan-Goshen lives in Tel Aviv with his wife, author Ayelet Gundar-Goshen, and teaches law at Sapir College. One Woman, One Time is his first novel.