Instructions Printed Inside the Box 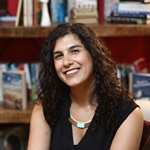 Instructions Printed Inside the Box

Nicole Hazan was born in London and made aliyah to Israel in 2010. She holds a BA in English Literature with Creative Writing from UEA (The University of East Anglia) in the UK and an MA from the Shaindy Rudolf Graduate Programme in Creative Writing at Bar Ilan University. Hazan is an alumni resident of Vermont Studio Center, where she was awarded a merit based scholarship. She teaches English at Hakfar Hayarok school, where she is the middle school English Literature and Language coordinator. Hazan lives with her husband in Tel Aviv and is working on her first novel.