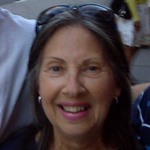 Geanie Grenshaw (a pseudonym) was born and raised in the Bronx, New York. She studied writing at NYU and drama at the HB Studio and Playwrights Horizons. After taking a course in Holocaust Studies and Documentation at FIU, she interviewed survivors for both FIU and the Spielberg Shoah Foundation for ten years. She is a mother, grandmother, and wife currently living in Pembroke Pines, Florida.