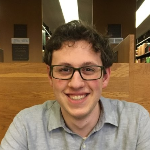 Akiva Schick, a New York City native and Modern Orthodox Jew, is a graduate of Yeshiva University, with a BA in English Literature. He has lived and studied in Jerusalem where he studied Bible and Talmud, and currently works for Scholastic Inc. He also works as a freelance editor, and is currently working on his first novel. His hobbies include the history of the Ancient Near East and losing track of tabs on his computer.