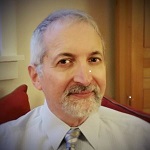 David Regenspan grew up in northern New Jersey but spent most of his life in upstate New York.  He received a masters in English from the University of Rochester, a masters in Near Eastern Studies from Cornell University, and ordination as a Reform rabbi from the Hebrew Union College-Jewish Institute of Religion in Cincinnati, Ohio. Over the years he has served as both a congregational and a freelance rabbi. He has published poetry in Seneca Review and fiction in the online journal Amarillo Bay. He has written two novels for which he is in search of a publisher. Meanwhile he enjoys community activism, jazz, blues and classical music, and the company of his wife, emerita professor Barbara Regenspan, and his grown children Ben and Sarah Regenspan.