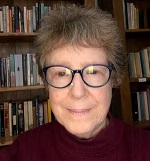 Deborah Freeman has been mainly a playwright. Her plays include Candlesticks, The Scapegoat, Xanthippe and The Song of Deborah. The Song of Deborah was translated into Hebrew by Avital Macales and staged at the Khan Theatre, Jerusalem in 2016.  Recent short stories include: “The Seventh Floor,” and “By Madeleine Black,” in Stand Magazine, “From the Dining Room Table,” in Momaya Press 2018 Anthology of Short Stories, “The Dressmaker” published in Litro Online and also in Didcot Writers 2018 Short Story Anthology. She has completed two novels, Mrs. Faust and Paper in the Cracks, the latter set in England and Jerusalem at the time of the Six Day War.