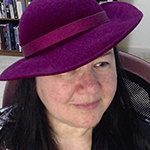 Carolyn Ivy Stein is a writer and editor living in Memphis, Tennessee. She has received several Honorable Mentions from the Writers of the Future contest for science fiction and fantasy stories written in the last year and a half. She has contributed articles to The Sea in World History book set, Atlas Obscura website, and other publications. She writes romance, historical, fantasy, and science fiction as well as non-fiction and gaming supplements. She has a soon to be published collection of Norse fantasy short stories, Lightning Scarred and Other Stories. Her current work in progress is a maritime adventure novel set on the Mediterranean and in the Jewish sector of 38 CE Alexandria.