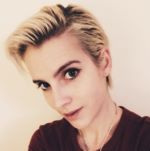 Sara McKinney is an MFA candidate at the University of Arizona and current Managing Editor at the Sonora Review. Her fiction has appeared in Flying Island Literary, Scribble Lit Magazine, and received nominations for the PEN/Dau Award and the Pushcart Prize. She lives in Tucson with two entitled orange cats.