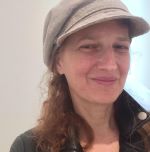 Rita Taryan is a Hungarian-born Canadian-American writer based in Brooklyn, New York. She has worked as a puppeteer, a security guard, a barmaid, a disc jockey, a tool and die worker, and a translator of articles and letters. Currently, she teaches adult literacy and ESL in the Bronx Community ESL Program, which is a partnership between Fordham University and New York’s Department of Youth and Community Development. She also devotes her time to the English Language Institute Center for New Immigrant Education (CNIE), helping asylum seekers and resettled refugees. Her poetry has appeared in Room and in Culture, Art, News,and she is a winner of a Norma Epstein Foundation Award for Creative Writing.