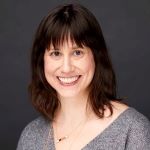 Abigail Beshkin is a writer and editor living in New York City. A graduate of Columbia University School of Journalism, she spent almost a decade as a reporter and producer for public radio stations in Phoenix and Boston, and her work has been heard nationally on NPR, among other places. Her fiction and personal essays have appeared in The Forward, Universal Hub, and Submerging, and she has participated in the Bloom Reading Series, which she also curates; the Eagle and the Wren reading series; and the popular storytelling show and podcast “Soundtrack Series.” She has been a finalist in the Brooklyn Nonfiction Prize competition and the Between the Vines and Cuttyhunk writer’s residencies, and has studied with the writer Hannah Tinti, among others. She is the editor of Columbia Business, the magazine of Columbia Business School.