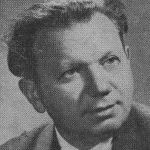 Translated from Yiddish by Daniel Kennedy

Hurt and offended, Zadok made his way back to the flooded yeshiva.

Samuel Isban (the author) (1905–1995) was born in Gostynin, Poland and emigrated to America in 1937. A prolific journalist and author in both Yiddish and Hebrew, Isban published numerous novels and short story collections as well as a book of reportage Illegal Jews Part the Seas. He is most remembered for his stories dealing with life in Palestine before the foundation of the state of Israel.

Daniel Kennedy (the translator) is the translations editor for In geveb: A Journal of Yiddish Studies. His translations from the Yiddish include Warsaw Stories by Hersh Dovid Nomberg, and A Death: Notes of a Suicide by Zalman Shneour, both of which came out of the Yiddish Book Center’s Translation Fellowship.