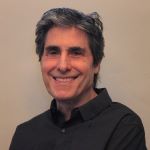 Michael Vines received his MA in English from Columbia University. Aside from a produced screenplay for a horror film, about which the less said the better, his other writing credits are anonymous—print, radio, and television advertising for national and global clients of several of New York’s most renowned advertising agencies. “My Industrious Next-door Neighbor” is excerpted from his unpublished novel Treblinka, Mon Amour. He lives in New York City with his wife where he enjoys reading, writing, playing blues and rock guitar, and following politics and the St. Louis Cardinals.