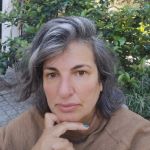 I never made it into the advanced literature program, despite Hayuta’s recommendation. The class administrator and the principal both explained that I was much better suited to the high school’s secretarial and bookkeeping program because of all the other low grades I’d earned during the time that my mother returned home from the mental hospital. Dad was happy. “It’s better,” he said, “that you learn a real profession.”

Copyright © Riky Cohen 2021
The sections cited from In the Prime of her Life were translated by Gabriel Levin, and originally published in Eight Great Hebrew Short Novels, edited by Alan Lelchuk and Gershon Shaked (1983; third edition, Toby Press, 2009). They are cited here with the permission of Koren Publishers.

Riky Cohen (the author) (born 1969) is an Israeli author and poet. She regularly publishes short stories and is a founding editorof “The Garage,” a literary supplement. Her first book of poetry, A Dirty Pile in Every Room, was published is 2014. That same year saw the publication of the short story anthology she edited and contributed to: Is It Crying With You Too? Another anthology of poetry and photography under her editorship was published in 2016. Her book of poetry A Thin Veil was published in March 2019.