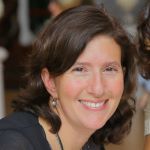 Julie Zuckerman‘s debut novel-in-stories, The Book of Jeremiah, was published by Press 53 in May 2019. Her writing has appeared in Jewish Women’s Archive, CRAFT, Tikkun, Crab Orchard Review, and Sixfold, among other literary magazines. A native of Connecticut, she now lives in Israel with her husband and four children. She works full-time as a senior marketing executive at an educational technology company. She is the founder of the Literary Modiin author series, connecting readers and writers of Jewish books. When she’s not writing, she can be found reading, running, biking, and trying to grow things in her garden.