The Firmament and the Night Doll 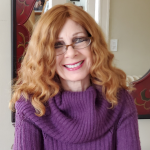 The Firmament and the Night Doll

As she does, the right wing tips upward and the plane begins to turn, and there on the left, is the water, like a painting, speckled with tiny points of glittering light, and on her right, only boundless sky. The wing lowers, and in the distance she can see tall buildings sparkling in the sun, reaching so high, as if aching for the sky.  It is all so exquisite. Without thinking, she finds herself whispering, “Ma tovu ohalecha Yaacov, mishkenotecha Yisrael.” How good are your tents, O Jacob, your encampments, O Israel. She knows these aren’t the right words, but soon she will have the right words for this glistening new world.

Tehila Lieberman’s debut short story collection, Venus in the Afternoon, received the Katherine Anne Porter Prize for Short Fiction and was published by UNT Press. Her novel, The Last Holy Man, was recently a finalist for the U.K.’s Exeter Novel prize.  Tehila’s individual stories have been awarded the Stanley Elkin Memorial Prize, the Rick Demarinis Short Fiction Prize and the U.K.'s Bristol Short Story Prize and have appeared in many literary journals. Her non-fiction has appeared in Salon.com, Eretz Acheret and Lilith. Originally from New York, Tehila completed her BA in English Literature at Hebrew University in Jerusalem and an MA in Psychology at Ferkauf Graduate School in New York. She currently lives in Cambridge, Massachusetts where she consults as a writing coach for Harvard Business School.