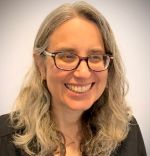 But as I step across the invisible line into Israel, its clean, modern facilities beckoning in the night, I am not sure I will.

Julie Wiener is the communications director for a Jewish nonprofit. She worked for more than two decades as a reporter and editor, writing for such publications as The Associated Press, Wall Street Journal, New York Sun, and the Jewish Telegraphic Agency. From 2006-2011, she wrote “In the Mix,” a column and blog about intermarried life for the New York Jewish Week. She lives in Jackson Heights, New York, with her husband and daughters. “Leaving Egypt (Passover 5752)” is excerpted from Julie’s unpublished (for now) novella, “Hooker Beach.” Another excerpt, “Blessed Is the Name” was published in November in the Jewish Literary Journal.