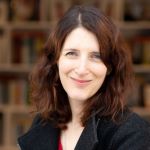 Deborah Zafer lives in London, where she works in the public sector by day, writes by night, and looks after her family and rabbit in the hours between. After many years of solitary writing, she has finally decided to be brave and start submitting her work to see what happens and join in the conversation. She can be found @deborahzafer on Twitter and at  www.deborahzafer.com.