A Box of Holocaust 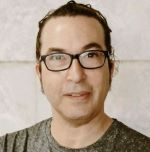 A Box of Holocaust

The box continues to sing.

Yaron Regev is an author and translator. He is the author of two graphic novels, Ghosts of Love and Country (2019) and The Cave (2022), as well as an upcoming YA fantasy series called The Door Behind the Sun, the short play Until the Children Will Return, and several adult novels.